“One of the most poignant voices currently floating about… Ayla Nereo is an otherworldly artist who shares the fruits of her soul.” — The Huffington Post “[Ayla’s] relationship with the earth is imprinted in her music… expansive and intriguing.”  – Billboard Ayla Nereo‘s voice is a beacon of light that hits straight to the heart. […]

Lulacruza is an electronic folk duo operating at the junction of the hypermodern and the ancient. Their music weaves together hypnotic female singing, South American folk instruments and electronic processing, while channeling pulsating waves from the source of creation. Lulacruza combines songs, soundscapes and dance music with astonishing ease. In their live sets, they process […]

CRAIG KOHLAND / SHAMANS DREAM “Medicine Music for the Shamanic Journey” Craig Kohland is a music, festival and retreat producer, multi-percussionist, performer and DJ that is driven by the healing rhythm of the drum and the creative expression of the sacred. ” Shaman’s Dream, Craig’s multi-faceted music collective, has been at the forefront of the […]

Submerge into Full-Spectrum Medicine… Ixchel Prisma weaves all the colors of the rainbow into a deep and delicious sonic journey. Electronic beats and instrumental soundscapes are blended together with uplifting lyrics, wide ranging vocals, and poetry. Influences of multicultural medicine music, R&B soul flavors, and soaring etheric sound healing are fused together to create Sonic […]

“A Revolution without dancing is not a Revolution worth having.” International beat weaver, poet, and vocalist; AppleCat was raised on the West Coast of Canada, she specializes in Deep Dubstep, Fairytale Bass, Trap, World, and IDM. Music has been her number one passion since they day she was born. On the dancefloor she creates and invites […]

J Brave is an artist in action who uses music as a vehicle of service. This former counselor for Homeless and At-Risk youth turned MC & DJ is a on mission to brake walls, and build bridges to bring people together! He is the founder of the internationally renown Hip Hop collective the Luminaries, visionary […] 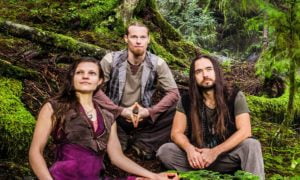 Raury Deshawn Tullis, professionally known by the mononym Raury, is an American singer, songwriter and rapper from Atlanta, Georgia. He is known for his eclectic sound mixing soul, hip hop and folk. He was born and raised in Stone Mountain, Georgia. Raury released his debut mixtape Indigo Child, on August 25, 2014. The mixtape reached […]

Nahko and Medicine for the People

Nahko and Medicine for the People is a Portland, Oregon-based musical collective known for their “real-talk” lyrics, contagious and influential messages, as well as their catchy melodies. Since its conception, one of the band’s primary goals has been to bridge cultural gaps and unify diversity with their music. Front man Nahko Bear told Huffington Post […]

Priya Deepika is an advocate, sound healer and experience producer, creating sonic pathways for each individual and humanity’s healing, transformation and empowerment. Her music is inspired from her deep seeded roots in South India intertwined with Jazz, Blues, 90s R&B, House and Techno, witness the evolution of traditional to electronic music. Her first upcoming solo […]